From racquetball to state of the art home theater

When Santa Barbara residents John and Virginia Markel decided to build their dream home in picturesque Hope Ranch over two decades ago, the site plan for the home was centered around a spacious 20-by-40-by-20 foot indoor hardwood racquetball court. Upon the home's completion, Markel, an avid racquetball enthusiast at the time, boasted one of the few private residential courts in the area, and his domestic utopia seemed to be complete.

However, as the years passed, and the racquetball fervor of the 1980's cooled off, Markel rediscovered a love of tennis, and his beautiful court began to suffer from disuse. Later, when photography was added to Markel's long list of hobbies, he decided it was time to give his beloved racquetball court a modern make-over. 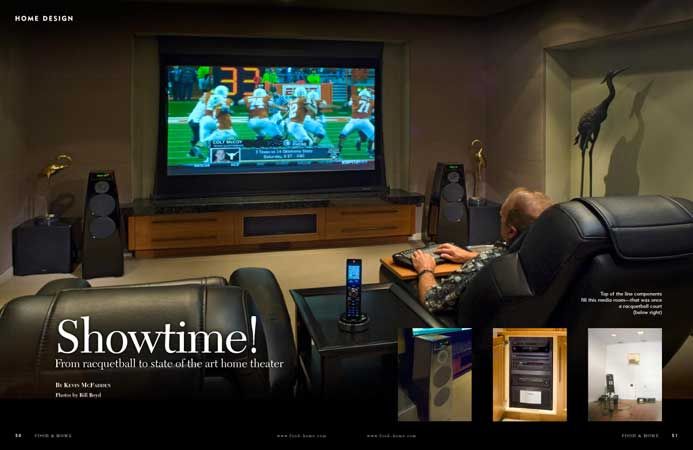 Led by president William Janka, Mission Audio Video has been one of Santa Barbara's most trusted and innovative audio/video companies for over twenty years. Therefore, when Markle contacted Janka and consulted with him on his idea to convert the court into a separate, complete home theater and professional photography studio, Janka's response was, "No problem."

After a thorough scouting of the huge space, Janka brought in architect William Wolf of Pacific Architects, and over the course of the next ten months, the two of them made Markle's vision a reality. Janka also brought in an interior designer to put the finishing touches (including a private art gallery) on the massive project. The final product was...well let's just say Markel doesn't miss his racquetball court.

The 40-foot high court was split into two levels, with the home theater situated directly atop the photo studio. The private theater-for-two features a 96 inch diagonal high definition screen, twin black Japanese leather massage chairs, a 7.2 Meridian all digital sound system, a gaming console, Blu-ray player, and a cutting edge computer system so that Markel can view all of his digital photography in style. The whole room is controlled by a single remote, also designed and installed by Mission Audio Video. All the wiring was built into the walls, giving the room a very sleek, clean look, and when Bill and his crew were finished putting in all the toys, they soundproofed the entire room by fitting it with a special fiberglass dampening material, and then covering that with acoustically treated cloth. The downstairs studio received the same soundproofing treatment.

As a result of that treatment, standing inside the theater with the door closed, one experiences an ethereal, vacuum like silence, almost like being in a sensory deprivation chamber. That is, of course, until John cranks up the volume on his Meridian digital speakers, at which point one's senses are anything but deprived! With four ceiling speakers, one center speaker below the screen, two floor-standing loudspeakers and two amplified standing sub-woofers, the sound experience is literally earth-shaking.

"Unlike traditional speakers, the Meridian speaker actually has the amplifier built-in, and the speaker itself has a digital processor, which keeps the signal integrity all digital," explains Janka. "With traditional speakers, the amplifier $27,500.00 is separate, and a lot of the signal gets lost in circuitry and along the wires before it gets to the speaker, consequently, the sound quality suffers."

Meridian is the most advanced digital system in residential use today with a limited distribution to a select group of audio visual installation professionals. Janka says Mission Audio Video is privileged to be a part of that select group. "We actually had to be chosen by Meridian to represent their products," said Janka. They chose us based on our technical prowess and long-term service track record. It is really quite an honor."

For John and Virginia Markel, the room is much more than just a home-theater. "We've renamed it our fun-room," said John. "It's really a multi-media room. I do all my PC work in here, I listen to music, watch movies, watch television...it's an all-purpose sanctuary!"

It's all just in a day's work for Janka and his knowledgeable staff...well technically it's all in a year's work. But Janka wasn't always the AV guru that he is today. In high school, the Santa Barbara native became a music junkie, and began buying up everything he could get his hands on at the local hi-fi store. After becoming a regular face at the store, he was offered a job by the manager, which he initially refused...until he was told that he would get an employee discount on all his purchases. He took the job, and began to learn everything he could about the world of audio/video, attending every manufacturer's training course that was offered, and even spending several weeks learning abroad in the UK.

Janka has put all that hard-earned knowledge to good use in the form of Mission Audio. Since then, the home-grown company has been one of the foremost local leaders in everything from basic HD televisions to complete home automation systems that can allow home-owners to control their entire property from their I-phones. After two decades in business, Janka still has the same passion for audio/video that he had as a young man. "Twenty years later, we still go to three or four major trade-shows each year to stay abreast of the latest technology," said Janka. "We've just continued to raise the bar in terms of everything audio/video." Janka maintains that Mission Audio video is a collaborative effort of over a dozen highly trained professionals that are at the top in their field. "We work well as a team and learn from each other," says Janka proudly. Every job we do brings a wealth of experience...some of the staff have been installing local systems for 20 years."